An extraordinary pink circular bar held the position of honor in the magazine’s Handmade exhibition Wallpaper* titled “X: With love” and held at Milan Design Week. The bar, designed by architects Chan+Eayrs and made of red oak by Sebastian Cox, was created to respond to the commission defined as “X” by the magazine team on the occasion of the tenth anniversary of its exhibition in Milan and was exhibited from 9 to 13 April.

Blushing Bar (“The Blush bar”) has been made of American red oak in collaboration with the American Hardwood Export Council – AHEC. It consists of 10 modules intended to prepare cocktails, each of which constitutes a variant of a sculpted curved element, which are connected forming a circular bar.

“We interpret the X as number 10 — which represents the tenth anniversary of Wallpaper’ Handmade sample*— and as a kiss of love, so the name and color of the bar. Love makes the heart blush and throb, accelerating blood circulation through the body through our veins,” explains Merlin Eayrs, one of the two partners of London-based architecture firm Chan + Eayrs. “Red oak has a pink skin-like hue and a porous nature with capillaries or veins so open that air can blow through a thin section. Sebastian Cox has pumped deep red dye through these wooden veins, symbolizing the veins through which blood circulates through the blushing skin by the effect of love.”

“Normally, a bar bar is linear and acts a bit like a barrier,” Merlin continues. “By building it circular, it becomes a more interactive and attractive place; makes you a character on the scene.”

“The bar bar is a place of connection, a vanishing point to meet. The feeling it causes is to find yourself in a very personal place, as happens in the projects we usually accept” explains Zoe Chan (the other half of Chan + Eayrs). “We wanted to break down the concept of bar bar,” Chan adds, “and divide its various functions into ten components that came together to form a whole.” Thus, Blushing Bar has a space for alcohol, another for soft drinks, another for citrus cutting, etc. There is even a pile and a faucet, of course all rigorously crafted in red oak. The wooden parts that are in constant contact with the water have been heat treated for greater dimensional stability in a humid environment, while the faucet has been lined with a flexible plastic tube and features an elegant brass end.

With its sculptural exterior faces and sensual carved feet, the bar combines sculptural qualities with functionality while highlighting the unique properties of the wood with which it is made. “Red oak is a porous material,” explains Sebastian Cox. “When you cut a thin section of this wood and put it in the backlight, you get a beautiful light speckled effect through the fast-growing spring wood.” 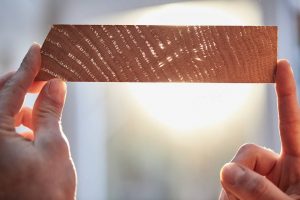 “We are obsessed with the size of the xylem and the flowerofof of wood. They’re exceptionally large. You can practically count the number of pores of the testa. This does not affect the strength of the wood, but it does make it porous and therefore unsuitable for some applications for which white oak is used, such as whisky barrels,” Cox says. 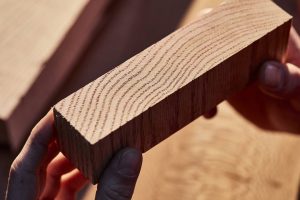 Sebastian and his team machined a series of uniform holes in the wood testa that filled with red calligraphic ink. “By filling in the holes, we ensure that the ink is evenly distributed across the entire width of the table. By using calligraphic ink we get a very intense color”, says Cox.

He then placed a template on the wooden testa through which he was able to introduce press-air. He sealed the union between the insole and the wooden board and began to introduce air at pressure little by little.

This pressurized air forces the introduction, through the testa, of ink into the extremely porous structure of red oak wood, emptying the ink existing in the perforated holes in a matter of seconds. 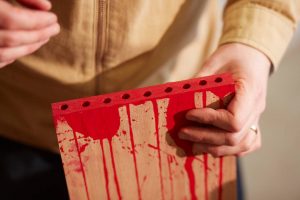 The process also injects an element of fun into Blushing Bar. “We liked the “paradox” it entailed,” Sebastian explains, “as he says, “if you think red oak is red, we’ll give you red!””

He adds that while AHEC’s director for Europe, David Venables, was initially concerned by the idea of “further redoaking,” he was convinced by the creativity and beauty of the final effect.

Until we find the method of injection with compressed air, there were some problems. Proof of this is the walls of the workshop, with “blood spatter” of red ink. “In the end we opted for 10 bars of pressure with which we saw that the ink circulated along the board evenly and evenly”, explains Sebastian.

The ink tries to find its easiest route through the wood, which means it naturally migrates to the growth area with spring wood that is less dense. The result is that the fine rings of this material are highlighted in red on the surface, while the densest growth area found in summer wood is left uncolored. The effect is accentuated by using tangential cut-like boards in which the contrast between spring and summer wood is more pronounced.

Cox had to try several inks before finding the right one. “Everything from the explosion of wood to ink spraying throughout the workshop,” he says, pointing to his laptop, now stained with pink. In the end, however, the team found the solution in the calligraphic ink, an ink to water not too viscous and non-toxic. “It provided a really intense color and, in addition, we liked the idea of using in this messy way a fine material usually used in calligraphy,” Cox continues. 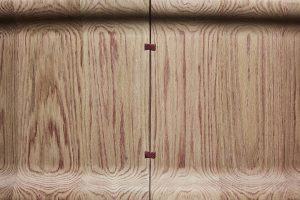 An essential element of the project has been the interaction between technology and craftsmanship. By milling with numerical control and the use of laminated wood, it has been possible to make the veining stand out as much as possible. In Chan’s words, “there is an interesting dance between the machine and the hand”. We use the machinery to improve the way the wood works, but it always goes back to manual work for finishing.” As a result, the bar has sliding dovetail joints joining modules, cutting boards made of paired testa wood, an ice section with sliding lid made of molded and connected red oak slats and a basket woven for the fruit in the juice area. 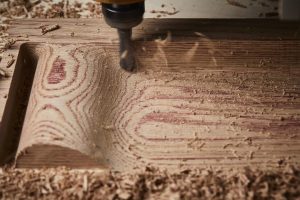 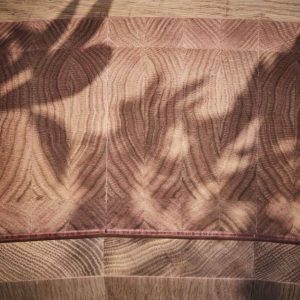 For Cox, “the curved edges and feet of the bar bar offer a magnificent image of the wood in multiple dimensions and allow to appreciate the transition, which is rarely seen, from transverse veining to tangential or radial veining”.

The last phase of the process consisted of applying a special blend of very light pigmentation oil to the wood to subtly emphasize the contrast between the inked and natural coloured areas. 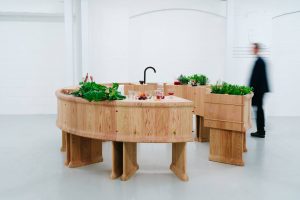 For AHEC Blushing Bar is a new chapter in the task of redefining red oak through experimentation. AHEC believes that red oak has been a heavily ignored wood unjustifiably in Europe. “For some, mistrust stems from the name,” says David Venables, AHEC’s European director. ‘They assume that wood is much redder than ordinary oak, when in fact red refers to the color of the leaves of the tree in autumn and it is often not possible to distinguish the two oak species. Once the designers work with this species, they surrender to their “warmth, veining and color””, adds Venables. “Aesthetically it’s very beautiful because of its pink tone and pleasant touch,” Eayrs agrees. 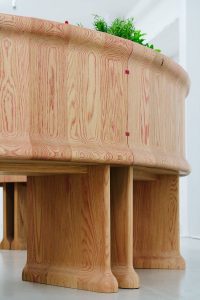 According to Venables, the use of red oak for this project was not only a choice, but the only possibleone, given the porosity and the ability to admit color through the conductive fabric presented by this species. Even so, there is also a weighty argument for its use, which has to do with sustainability. “Red oak is available in large quantities and is hugely underused. Each year the volume due to growth is much higher than the volume extracted”. “And it should be remembered that wood is only sustainable if it is used and, if the extracted is reforested, which, in the case of red oak, is done by nature itself, without human intervention, by natural regeneration.”

Cox believes that “we are at the beginning of the wood age” and that it is important to invite people to “constantly reconsider the use of wood, as it is the only material that stores CO2 and therefore an obvious part to solve the current climate crisis ethics.” He also claims that it doesn’t end here. Sebastian thinks Blushing Bar could have a legacy. “It’s not designed to be a single piece,” he says. “We are confident that the inking process can be extended to other uses and come into a commercial application.” 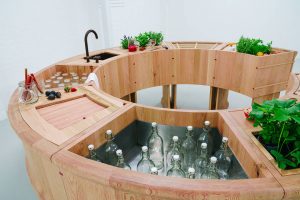 “Wood, in general, and red oak in particular, does not have to be used solely in the traditional sense of cabinetry,” Venables agrees. Blushing Bar,with its elegant profile and shapes as well as its deep pink rings on the surfaces, is as far away from a traditional wooden furniture you can imagine. Although it is wood, it does not resemble the above. 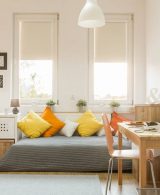 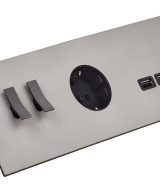